Nurses Strike to Defend the NHS, their Pay and Conditions

Nurses from the Royal College of Nursing took industrial action on the 15th December this year. They went on strike in defence of the NHS and to defend their pay and working conditions in the light of raging inflation running at over 14%.

Steve Barclay, the secretary of State for Health had instructed the Pay Review Board not to pay nurses above the 2% already awarded. This was a minimum payment and nurses had no alternative but to take action to defend the NHS, the only free national health service that Britain offers. Dramatically as it is, many nurses have such low income that they use food banks and rarely get by with the increased living costs.

Britain is experiencing massive action by the workers and the oppressed against the crisis of recession, the economic slump peaking since months now.

The British government, having an infatuation with Bonapartism, tries to save its crisis ridden system. Post, railway, port, bus, airport and university staff (likewise other sectors) are taking strike action to defend their pay and working conditions.

I visited the picket line by nurses in Kettering Northamptonshire and found determined workers who value the importance of the health service. They fight to stop the drain of nurses leaving hospitals. Their action continues on the 20th December with other health workers like ambulance drivers also striking in the new year. Unions like Unite, Unison and the GMB will join the action in the new year.

RCIT IN BRITAIN calls for a massive recruitment of doctors and nurses while all wages in the health sector must be increased by far more than the inflation rate! We need all health workers on a fair and wealthy income level, showing respect to their tremendous work if we want to turn NHS into a proper health care system. Furthermore, the strike wave of the various sectors of workers must be united in a general strike movement to bring down the current reactionary government and to replace it by a workers government.

Report by the Revolutionary Communist Current (RCIT Section in Brazil), 22 May 2022

The workers of Diadema, a municipality governed by the Workers' Party-PT, occupied the streets of the city center on Thursday morning, May 19th, in a big one-day strike for the adjustment of wages to inflation and against wage cuts.

The rally with hundreds of municipal civil servants left the headquarters of the Union of Diadema public workers and walked along Antonio Piranga Avenue to the Diadema City Hall. In the afternoon, the whole labor force of Diadema's public sector occupied the City Council to put pressure for the negotiations with the mayor, José de Filippi.

The administration, however, did not signal any willingness to meet the demands of the workers and proposed a new meeting only for May 31. Neither did it make any proposal for the compensation of salary losses.

The 2021 Wage Campaign agreement, contrary to what the Municipal Administration has announced, restored only part of the losses due to inflation. In fact, the wage losses until March 2022 did reach 8%. The workers can't give in, even more so in a scenario of the current high inflation.

A workers assembly held at the City Hall on May 19 therefore rejected the proposal of the City Hall to meet the Permanent Negotiating Table only on May 31. Faced with the intransigent opposition of the PT administration, the workers decided to strike indefinitely from the 25th of May.

João Evangelista, a representative of the Revolutionary Communist Current (RCIT Section in Brazil), made a strong and well-received speech at the assembly demanding that the PT administration be consistent with the speeches and the party's program during the 2020 election campaign when, at the time, the candidate Filippi defended the valorization of public workers in the city and the adjustment of wages to the rising inflation, but in practice he has the same traditional policy of rightists parties of lowering wages, privatization and outsourcing.

You can watch the speech of João Evangelista here: https://m.facebook.com/story.php?story_fbid=pfbid0bwT8MeLaN8pt62dbiT9uwjZhiFdkYAKynhdeob2xDrdySrxS779wM1bGz4f3LH42l&id=100008108617275

On Saturday 14th May around 50,000 people marched and demonstrated for a Free Palestine and for the end to Zionist terror against Palestinians. The march was led by Palestinian students organised in the Friends of Al Asqua. The majority of demonstrators were Palestinians and Muslims migrants, supporters of pro-Palestine solidarity group as well as the Stop the War coalition. A group of Antizionist Jews also participated in the demonstration.

There were prominent pictures of Shireen Abu Alkeh – the Palestinian Al-Jazeera journalist recently murdered by the Zionist army without any provocation. There were placards in support of Palestinians fighting for a Free Homeland from the River to the Sea and denunciations of the Apartheid state of Israel. There were chants of “Free Palestine” and “We are all Palestinian's now”.

Comrades of the RCIT Britain participated in the demonstration and sold our journal.

About 10,000 people demonstrated against racism in London on 19th March. The march started outside the BBC building near Oxford Street and ended at the Parliament Square in Westminster. The demonstration was supported by many organisations including the Stop the War Coalition and Stand Up to Racism. It also had a big contingent from Black Lives Matter. There were delegations from many trade unions including the CWU, UNISON, the RMT, PCS, UNISON and the Education Unions.  >>Read the full report here

In a huge rally in Buenos Aires, on the International Day of Struggle of Working Women (an independent women’s organization in close collaboration with Covergencia Socialista, the Argentinean section of the RCIT), the Defensorías de Géneros waved their flags and demands, such as the freedom of Karen Marín and Nancy Montiel. The comrades participated with their flags and banners. >>Read the full report here

The RCIT IN BRITAIN intervened in a large rally outside the Houses of Parliament in London on Saturday, 12th February. Organized by the group Fuel Poverty Action together with several solidarity organizations and socialist groups, the protest mobilized around 1,500 people. They hold placards calling for a windfall tax to cut energy bills and to nationalize energy suppliers whose profits are crippling people. Many energy suppliers have increased their profits tenfold while at the same time many people have been driven into extreme poverty. 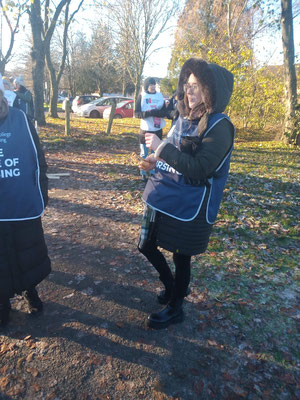 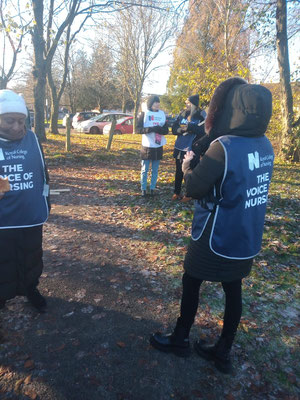 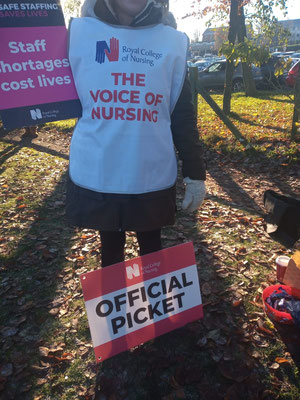 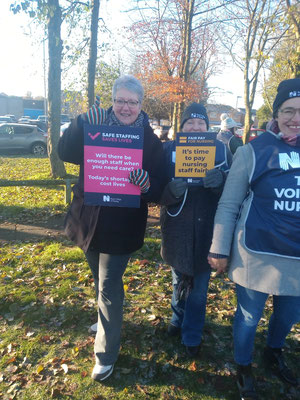 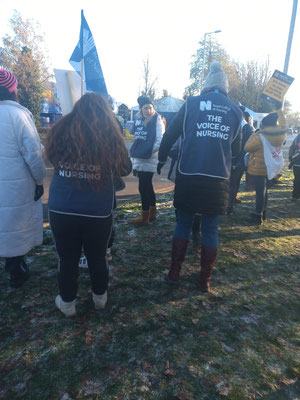 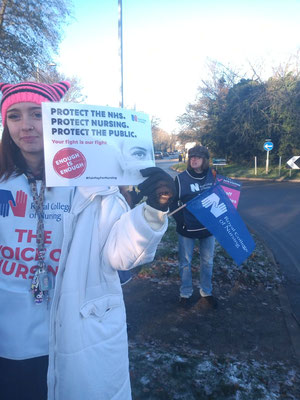 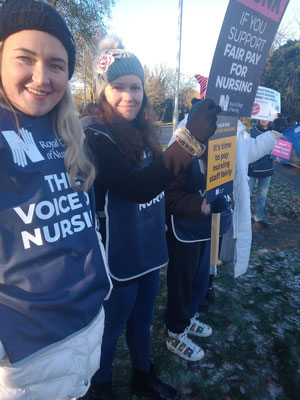 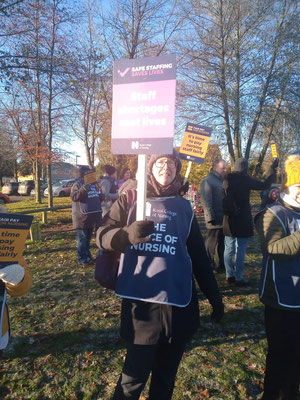 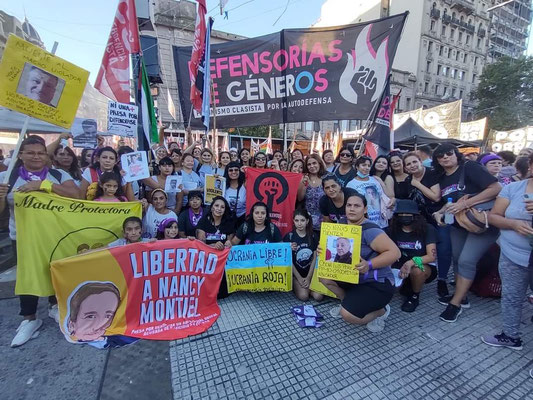 I attended this conference as a delegate from the East Midlands region. Motion 10 on the COVID-19 pandemic was a deeply reactionary motion defending the lockdown and the so-called Zero-Covid policy which has been advanced by many trade unions and those on the left. It is a well-known fact that during the lockdown in Britain all trade unions, many socialist tendencies and the social democratic Labour Party supported a nonsensical Zero COVID 19 policy.

The RCIT was one of the few tendencies that opposed the restrictions and lockdowns as a chauvinist Bonapartist policy instigated by the bourgeoisie to stem protests and demonstrations. It was an attack on democratic rights. It is especially irresponsible to lock people up in their own homes without medical supervision during the spread of a new virus. Not to speak about the long-term problems it creates on the long run with all the lifesaving check-ups and surgeries postponed or completely dropped.

The motion itself stated and urged Unite members to continue to use face coverings even with the general trend in society to stop using those. Further, it encourages the use of Lateral-Flow-Tests and applications which are linked to hi-tech surveillance. Especially the face and the eye recognition technology were and are perfected by all the data provided through the testing. This feeds the Bonapartist state apparatus and encourage the development of further restrictions and attacks on democratic rights. The repeated use of vaccinations which are based on new technologies (mRNA vaccines) are praised as well. While those vaccines were clinically approved too fast and therefore remain suspect, they only benefit the rich pharmaceutical companies which maximise their wealth and profits.

I started by saying that the COVID-19 pandemic and lockdowns were a counter-revolution against workers and their families used by the bourgeoisie to forcibly imprison people in their own homes. Only a few groups resisted the lockdown and continued to demonstrate. Especially BlackLivesMatter and the climate activists from Extinction Rebellion. Most socialist tendencies on the democratic left accepted all these lockdowns and restrictions and served the interests of the bourgeoisie in support of these draconian methods. I insisted in my speech that it was an attack on democratic rights ushering in dictatorship and Bonapartist rule. While the lockdown took place there were more and more deaths taking place. There was no attempt by government to establish more Intensive Care Units or recruit more doctors and nurses.

A group of scientists who signed the ‘Great Barrington Declaration’ have argued early on that lockdowns were not necessary and even harmful. The only country which did not use lockdowns was Sweden. Many delegates listened to my contribution, and I had discussions with several of them. The RCIT was a lone voice against the stream pointing out the dangerous path of supporting this nonsensical Zero-Covid policy. However, now that in China (where barbarity and cruelty are the order of the day) mass opposition is taking place, the sentiment may change in the British left too. Uprisings against the Chinese Imperialist regime are taking place in the major cities in China proving what the masses of workers and oppressed truly think about the Zero-Covid strategy. Future will tell if UNITE has learned its lesson. If anything, the rank-and-file members should take the developments in China as proof of what Zero-COVID would really have looked like. We should take it as proof for how important it is to get rid of the bureaucrats who are a world away of the interests of us workers and poor.

About 10,000 people demonstrated against racism in London on 19th March. The march started outside the BBC building near Oxford Street and ended at the Parliament Square in Westminster. The demonstration was supported by many organisations including the Stop the War Coalition and Stand Up to Racism. It also had a big contingent from Black Lives Matter. There were delegations from many trade unions including the CWU, UNISON, the RMT, PCS, UNISON and the Education Unions. There were slogans denouncing the inherent racism in Britain with Slogans like “Scrap the Nationality Bill”, “Migrants and Refugees are Welcome here” or “Fight Racism”.

Comrades of the RCIT Britain intervened in the March and discussed with many about the Sunflower Convoy – a humanitarian aid convoy organised by the RCIT which will start from Vienna and link up with progressive forces in the Ukraine fighting against Russian imperialism.