After their failure to conquer the Al-Aqsa Mosque in Al-Quds/Jerusalem, the Zionists wage a new war

Yesterday, the Zionist state suffered a humiliating defeat. Despite mobilizing thousands of police and army, they failed to conquer the Al-Aqsa Mosque. Thousands of Palestinians, mostly youth, heroically defended this holy symbol of the Palestinian people, the Arab world as well as the global Muslim umma. Despite hundreds of injured and hospitalized, the heroic youth successfully stood their ground.

Even worse for the Israeli state, they had first to reroute and finally to cancel the notorious fascist Flag March where thousands of Zionist fanatics annually march through the historic Muslim quarters in East Jerusalem and chant “Death to the Arabs!” This was a historic victory achieved by the Palestinian youth in Al-Quds/Jerusalem as well as the resistance factions in Gaza.

In response to this humiliating defeat, the Israeli army has waged another barbarous war campaign against Gaza which they call Operation "Guardian of the Walls". They send their most modern warplanes and missiles against the small Mediterranean enclave. Within a few hours, at least 24 Palestinians, among them 9 children, have been murdered. In response, the Palestinian resistance has launched legitimate acts of self-defense.

There are strong indications that in these hours both the fourth Gaza war as well as the Third Intifada have begun. In several major cities the Palestinian masses have entered the streets in support of the heroic militants in the Al-Aqsa Mosque as well as in Gaza. Minutes ago, the Arab students have launched a solidarity strike. In al-Lydd near Tel Aviv many youths demonstrated on the streets.

In a highly symbolical scene captured in a video clip circulating in social media, activists in al-Lydd took down the Israeli flag at a square and replaced it with the Palestinian flag. Likewise, youth raised the flag of Hamas at the top of the Al-Aqsa Mosque after the resistance movement in Gaza had issued an ultimatum to the Israeli government.

These two actions symbolize that the seemingly almighty power of the Zionist state is challenged more than ever by the insurrectional Palestinian people!

The Zionist state is a wounded animal. The ruling class is deeply divided and unable to form a stable government since more than two years. Prime Minister Netanyahu is doing everything in his power to stop his corruption trial. However, despite provoking four elections within 25 months, Netanyahu is still unable to get a parliamentary majority in the Knesset. He as well as his rivals try to outdo each other by escalating the racist rhetoric as well as terrorist actions against the Palestinians – the native population which has been expelled and oppressed by the Zionist settlers since the foundation of the Israeli state in 1948.

But despite all this escalation, despite all attempts to build alliances with arch-reactionary Arab rulers – first and foremost the tyrants of the United Arab Emirates and Saudi Arabia – the Zionist state is incapable to pacify and defeat the Palestinian people!

In our yesterday’s statement, the Revolutionary Communist International Tendency (RCIT) and Convergencia Socialista (Argentina) already expressed their full and unconditional support for the liberation struggle of the heroic Palestinian people. All socialists, all opponents of colonial oppression, all righteous people must rally in defense of our Palestinian brothers and sisters!

With a single voice we say: Defend the Palestinian people – defeat Israel!

We send our greetings to our courageous comrades of the Internationalist Socialist League (RCIT Section in Israel / Occupied Palestine) who raise the banner of Antizionism and solidarity with the Palestinian liberation struggle under the most difficult circumstances.

We call for the formation of popular assemblies and militias so that the Palestinian people can organize and defend their struggle for liberation!

The treacherous Palestinian Administration Mahmoud Abbas must immediately stop its collaboration with the Israeli state and distribute weapons to the people so that they can defend themselves against the Zionist killers.

It is the urgent duty of the international workers and popular movement to mobilize all over the world in solidarity with the Palestinian people. Yesterday’s night spontaneous mass demonstration of thousands of people in Istanbul is an example which should be repeated all over the world.

All activities of boycott against the Zionist state and all forms of sabotage of arms shipments to Israel are important and legitimate acts of solidarity.

In the imperialist metropolises – first and foremost in North America and Western Europe – socialists should support all activities which undermine the shameful support of the imperialist governments for the Zionist Apartheid state.

From our Liaison Committee of RCIT and CS we strongly denounce those treacherous “left-wing” parties which give legitimacy to the Zionist entity by supporting a two-state solution (e.g. the Stalinist and reformist parties). We also condemn those “left-wing” forces which scandalously slander Antizionism as “Antisemitism” (e.g. the German LINKE or also the Argentinian “Trotskyist” FIT deputies in the regional assembly of Buenos Aires in June 2020).

We repeat: As long as the Zionist state exists, the Palestinians will continue suffering from state terrorism! This is why we stand for the socialist perspective of a democratic and red Palestine. We support the struggle for the destruction of the Zionist state and the right to return for all Palestinian refugees.

Comrades, brothers and sisters! Do not hesitate! Rally in support of the heroic Palestinian people!

We call all organizations and activists who share such a perspective to contact our Liaison Committee of Convergencia Socialista and RCIT in order to work together in building a Revolutionary World Party!

See also: Emergency Statement of the Revolutionary Communist International Tendency (RCIT) and Convergencia Socialista (Argentina): Occupied Palestine: Stand with our Brothers and Sisters in Jerusalem! Forward to the Third Intifada! Down with the Zionist State! Long live the Struggle for a Free Palestine! 10 May 2021, https://www.thecommunists.net/worldwide/africa-and-middle-east/occupied-palestine-stand-with-our-brothers-and-sisters-in-jerusalem/

Statement by the Internationalist Socialist League (RCIT Section in Israel / Occupied Palestine): Israel Hands Off Sheikh Jarrah and Out of Al Aqsa! 8 May 2021, https://www.thecommunists.net/worldwide/africa-and-middle-east/occupied-palestine-hands-off-sheikh-jarrah/

London/UK: Mass Demonstration in Support of the Palestinian People (22.5.2021)

Report (with Pictures) from a Demonstration in London on 22 May 2021, RCIT Britain, www.thecommunists.net

About 30,000 Palestinians and their supporters marched from The Embankment in London to Hyde Park. There were thousands of Palestinians draped in the Palestinian flag together with many Arab and Muslim supporters.

They chanted slogans like “Free, Free Palestine”, “We are all Palestinians here”, “From the River to the sea - Palestine will be free”. There were placards saying “Victory to Palestine”, “Free Gaza”, etc.

Comrades from the RCIT Britain distributed our leaflet and sold the latest issue of our journal Revolutionary Liberation.

This successful mass demonstration showed the determination of all Palestinians and their supporters to fight for the liberation of Palestine and the defeat of the Zionist enemy! 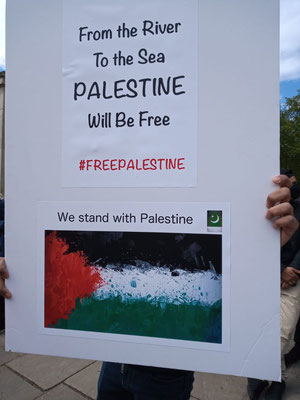 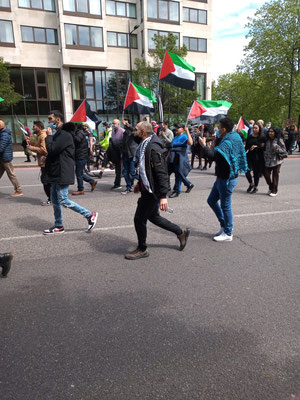 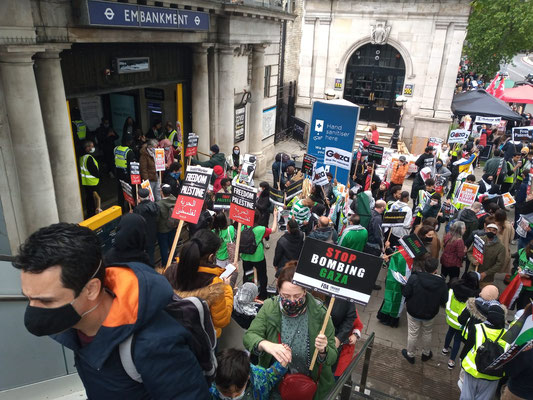 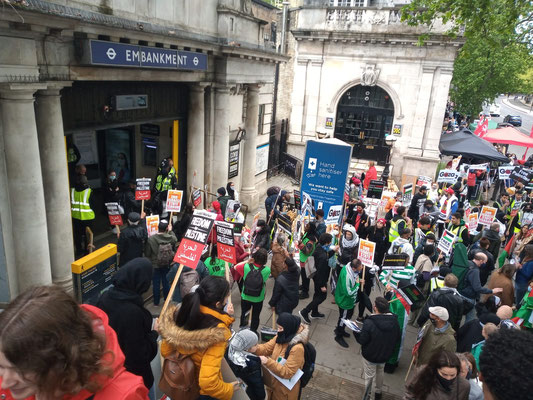 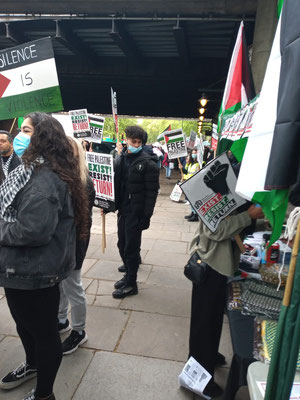 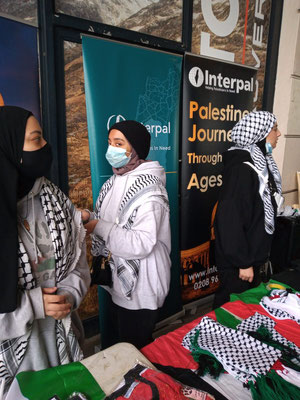 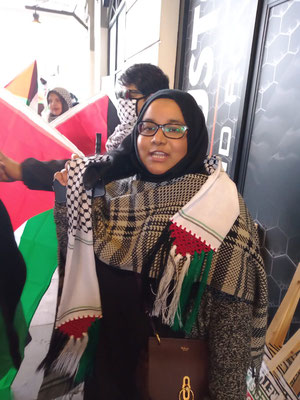 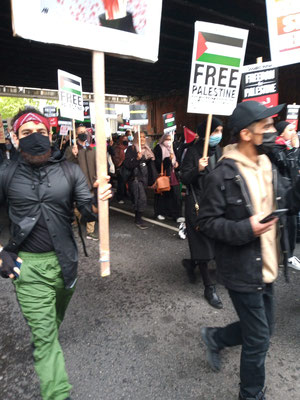 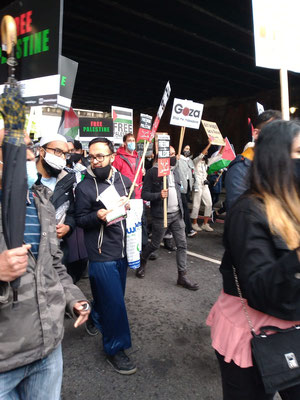 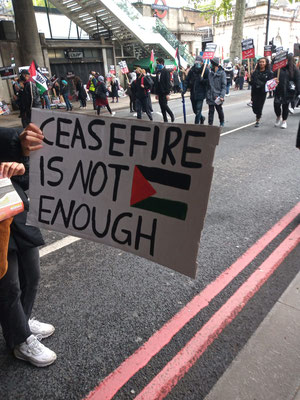 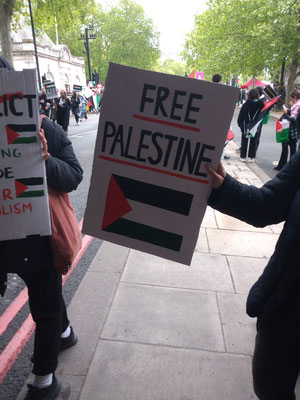 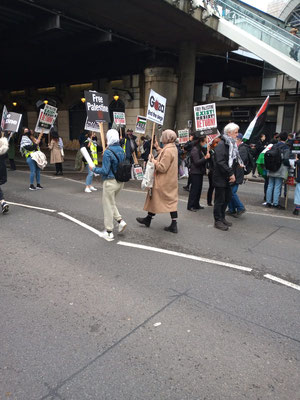 Vienna/Austria: Rally in Solidarity with the Palestinian Intifada (21.5.2021)

Report (with Pictures and Video) from a Demonstration in Vienna on 21 May 2021, Austrian Section of the RCIT, www.rkob.net and www.thecommunists.net

About 500 people – mostly Arab and Muslim migrants – assembled in the centre of Austria’s capital to show their support for the Palestinian Intifada. This was a remarkable event since the rally has been banned by police – reflecting the extreme pro-Zionist position of the Austrian government.

This ban came after similar bans in the past days. In fact, the pro-Zionist government wants to suppress all mobilizations for Palestine – especially when it is done by migrants!

Comrades of the Austrian section of the RCIT participated in the demonstration and distributed leaflets. Our comrade Michael Pröbsting, International Secretary of the RCIT, gave a speech in which he denounced the government and called for an international solidarity movement for the boycott of Israel (see the video below).

Report (with Videos) by Convergencia Socialista (Argentina), 17. May 2021, https://convergenciadecombate.blogspot.com

Today a new rally was held in front of the Israeli embassy. Last Thursday, we promoted the holding of an open microphone event, in front of the Israeli embassy, to condemn the criminal attacks of the Zionist army against the Palestinian people. Its realization was a step forward, since several left-wing organizations and representatives of the Palestinian people participated.

Today, promoted by comrades of the Nuevo MAS and Altamira’s PO (Tendency), another action of similar character took place. Among the speakers was Juan Giglio, leader of Convergencia Socialista. Among other speakers was also Jorge Altamira.

In our point of view, this rally should be the starting point for the convocation of a great national day in solidarity with the heroic Palestinian people.

For more pictures of the rally see: https://convergenciadecombate.blogspot.com/2021/05/hoy-se-realizo-un-nuevo-acto-unitario.html?fbclid=IwAR2mI0e9UcmxNwEQYHnywsFmfZ4yzJ5hkErDESoixXWSlIVW0qYSMFr1_dw

The Video can be also watched here: