Down with the pension reform and all attacks of the federal and municipal governments!

Public school teachers in the city of São Paulo have been on strike against a pension reform since March 8. This pension reform was first proposed by the former mayor Fernando Hadad (PT) before leaving the office when losing the election. Now the current city’s millionaire right-wing Mayor João Doria (PSDB) has modified the project to a worse version which includes a hike in employee pension contributions from 11% to until 19%, and the creation of a fully funded capitalization pension system managed by private funds for those workers who enter the public sector after the approval of the pension reform. If this retirement pension reform is passed, adding the deductions from the Income Tax, public sector workers face the dim prospect that up to 46% of their income could be discounted, that is, almost half of their wages!

Even the conservative media had to recognise that at least 93% of schools were affected by the walkout, with almost 50% of them closed entirely—and after 20 days these figures didn’t change. No doubt, this strike has been extraordinary! It has been the largest strike action in recent years with a massive participation of teachers and other public sector workers (doctors, engineers, nurses, urban service workers, etc.) during the last week. It has been an example of what is necessary to do when the working class faces a situation in which they see their fundamental rights being destroyed.

In fact, Doria’s pension reform intends to give benefits to the private banks and to increase their profits. Like the pension reform that the federal government of Michel Temer didn’t succeed to implant, this project leads to a complete privatization of pension reform in national level. In this it follows the extremist neoliberal model implanted by General Augusto Pinochet in Chile during the military dictatorship in the 1970s and 1980s.

We from the Corrente Comunista Revolucionária (CCR) consider this strike the most important event from class struggle in the last months against the neoliberal reforms implemented by the putchist government Temer and his allies. In summary, in the last two years and a half, after the destitution of President Roussef, the Temer government and the congress undertook all possible efforts to attack the working class like the labour reform, the complete outsourcing, increasing privatization of Petrobras and energetic sector, educational reform, etc.

The leadership of the mass organizations, the main leftists parties and federal trade unions did not organize a sufficiently strong and appropriate resistance to fight against these attacks. In fact, the mayors of Curitiba and Porto Alegre, in South Brazil, and the city of Rio de Janeiro had already succeeded in imposing the pension reforms against the will of the workers, but the icing on the cake and the most important is the richest city of São Paulo which has about 12 million inhabitants and almost 120,000 public workers. In case of approval of the pension reform by the rightist mayor João Dória, this would encourage the federal government to push the national pension reform just after the presidential elections in October.

* For the cancellation of the Pension and Labor Reform in São Paulo and other cities and no to Temer’s federal pension reform!

*For the cancellation of the labour reform, the complete outsourcing, and the privatizations!

* Down with the constitutional provision that allows the army to intervene in political matters!

* For a revolutionary workers' party – a new world party of the socialist revolution! For the Fifth International!

After we finished this article we received the news that that the councillors have temporarily removed the project for 120 days. The official reason has been that the mayor didn’t get enough support from the councillors even of his own camp in the municipal parliament. He needed at least 26 votes out of the 55 councillors. But the real reason is that the councillors felt the massive pressure of 100,000 teachers and public worker who stood in front of the building until the last minute. When the decision of the councillors reached the streets around, an indescribable demonstration of joy started among the crowd, an unforgettable and exciting scene for the history of Brazilian class struggle in the last years.

Everybody knows that this victory is not the final battle, because the feeling is that this is a long war. Although we have achieved an important victory, the teachers and public workers left the place and will return to work fully aware that it is necessary to keep the fight and mobilization, and most importantly, with their head up and proud, to be ready for the next battles. Congratulations, teachers and public worker from the city of São Paulo! Your example is the example for Brazilian working class and the working class of the whole world! 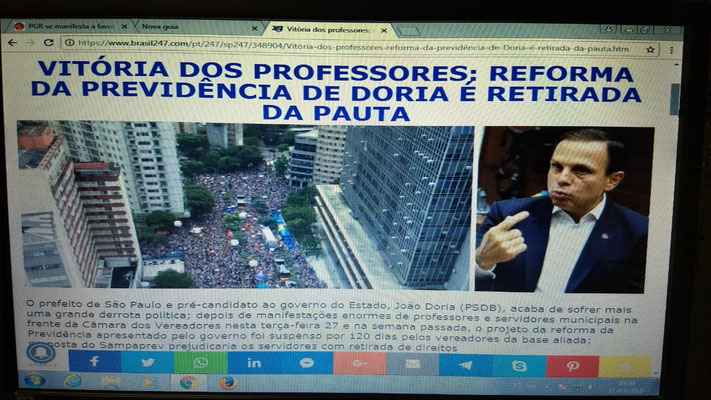