Report by the Corrente Comunista Revolucionária-CCR (Brazilian section of the RCIT), 7 June 2020, http://www.elmundosocialista.blogspot.com

Mass organized movements and opposition parties occupied not only the capital Brasilia but also the main cities of the country on Sunday, June 7. They protested against Bolsonaro's government and the neo-fascist movements, in defense of democracy and the rights of the people. Organized and peaceful, the demonstrations disproved the president Bolsonaro's speech that accused protesters of "terrorists" in an interview with CNN during the week.

The demonstration brought together health professionals, organized supporters of the main football teams, black community movements, the LGBT community, students, women, teachers, representatives of indigenous communities, artists, social movements and political parties. Like the United States and other countries, the demonstration respected health protocols, with distancing, distribution of alcohol in gel and the use of masks. The walk was attended by people of all ages. The demonstrators also defended the public Unified Health System (SUS) and offered solidarity to those killed by Covid-19 across the country (more than 35.000).

But most importantly on Sunday was that these large demonstrations break with the lockdown imposed by state governments, with the tacit acceptance of the directions of the mass movements and left-wing parties, which prevented the struggles in the streets of the workers and oppressed, while the attacks on the rights of the working class are increasing.

Long live the struggle of the Brazilian Workers!

* For the annulment of Article 142 of the Constitution!

* Cancel all austerity measures such as pension reform and labor reform!

* For the immediate formation of a broad single united front of all mass organizations of the working and oppressed class (PT, PCdoB, PSOL, PCO, CUT, MST, MTST, etc.) to organize a mass resistance!

* For a Revolutionary Constituent Assembly! 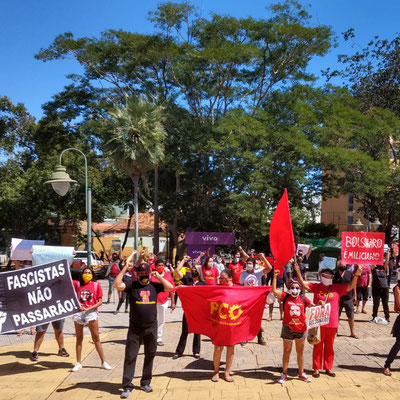