Our comrades of the Revolutionary Socialist League (RCIT Section in Kenya), together with the Social Justice Centers and other forces, have initiated an alliance which calls for a People’s March' on 7th July. The alliance has been formed in the light of the massive increase of hunger, misery and state repression under the cover of the COVID-19 pandemic.

The platform of the campaign includes a number of demands which express the most urgent need of the workers and poor people in Kenya. (See the platform for the march as well as posters below.)

The demonstration will take place on a traditional day of popular protests in Kenya, known as Saba Saba (“Seven Seven” in Swahili language). On 7th July 1990 mass demonstrations took place protesting against the one-party regime of President Daniel arap Moi. These protests opened a process of limited democratization. Since then, popular marches take place annually on this date which combine the commemoration of this mass uprising in 1990 with actual popular demands.

This campaign builds on the successful demonstration which the RSL and the Mathare Social Justice Centers organized on 8th June. On that day, hundreds of people marched in Mathare, a major slum in Nairobi, in order to protest against increasing police violence and hunger. This demonstration was widely reported not only by Kenyan but also by major global media. (See the RSL’s report “The Oppressed Masses demand ‘Stop Killing Us!’”, 9th June 2020, https://www.thecommunists.net/worldwide/africa-and-middle-east/demonstration-against-police-brutality-in-nairobi-8-6-2020/)

The RCIT congratulates the comrades to this excellent initiative and states its full solidarity with the legitimate demands of the workers and poor!

ALL FOR THE PEOPLE’S MARCH!

YES TO JOBS, FOOD AND HEALTH! NO TO STATE REPRESSION AND POVERTY!

It is without a doubt that life is getting increasingly unbearable for the people of Kenya. We have witnessed a massive loss of jobs among our population and a terrible economic crisis due to state mismanagement and corruption. We are witnessing state demolitions carried out against the people. We are faced with an acute water shortage. Cases of police killings and brutality are on the increase. Majority of Kenyans cannot access proper medical services. Rent and food is unaffordable.

People in Kenya are experiencing a gigantic wave of attacks. The crisis of neoliberalism throws many millions of people into poverty, the lockdown and expansion of state repression threatens the limited democratic rights which have existed in parts of the world and the COVID-19 pandemic endangers the health and lives of many people

THEREFORE, WE THE PEOPLE OF KENYA DEMAND:

1. Provision of food for everyone

2. Immediate end to police killings and brutality and State Repression

4. Provision of clean water for everyone

5. Provision of decent housing for everyone, and an end to state demolitions

6. Equitable access to jobs for everyone, and an end to mass unemployment

8. Freedom and emancipation from foreign interests

9. Right to land for everyone

We call upon the patriotic citizens of Kenya to rise up and demand to live a dignified life!

We call upon the patriotic citizens of Kenya to join the push for equality, freedom and justice!

We call upon the people of Kenya to stand up for their sake and for the sake of future generations!

We call upon the people of Kenya to SAY NO TO STATE REPRESSION, POVERTY, UNEMPLOYMENT, LANDLESSNESS AND DISEASE!

We call upon the people of Kenya to join the PEOPLE’S MARCH and SAY YES TO JOBS, FOOD, HEALTH AND DIGNIFIED LIVING!

THE PEOPLE, UNITED, SHALL NEVER BE DEFEATED! 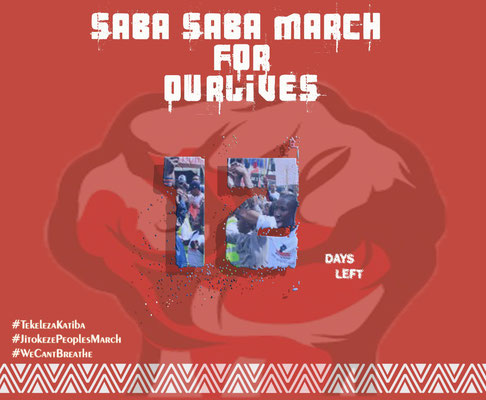 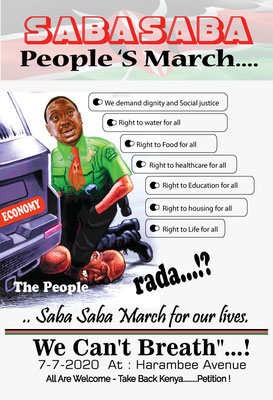 Documents from the Social Justice Center