Ethiopia: Down with the State of Emergency!

For the overthrow of the reactionary capitalist EPRDF Dictatorship – puppet of the imperialist Great Powers! For a Revolutionary Constituent Assembly! For a Workers and Peasants Government!

Joint Statement of the Africa Secretariat of the Revolutionary Communist International Tendency and the Economic Liberation Association (Zambia), 20 February 2018, www.thecommunists.net

1.             The Ethiopian dictatorship is in a deep crisis. On 15 February Prime Minister Hailemariam Desalegn's suddenly resigned. The next day, the regime imposed a state of emergency for the whole country which shall last for six months. Parliament - where the regime based on a four-party ruling coalition called Ethiopian People's Revolutionary Democratic Front (EPRDF) controls all 547 seats – is expected to ratify it within two weeks.

2.             This is only the latest highpoint of the explosive political process which started in November 2015. Since then, the regime has faced a series of mass protests as it is unable and unwilling to overcome widespread poverty and misery. It killed hundreds of people participating in anti-government protests demanding equality and democratic rights. In August 2017, the regime lifted a 10-month state of emergency. Continuing mass protests forced the regime to make concessions and it has freed more than 6,000 political prisoners since January. Now, after the surprising resignation of Prime Minister Hailemariam Desalegn, the regime tries to violently suppress the outbreak of an open revolutionary situation by imposing a six month state of emergency.

3.             The EPRDF regime follows the neoliberal capitalist agenda and serves the interests of the imperialist Great Powers as well as of the small domestic black capitalist elite. It rules with iron fist since coming to power in 1991. It is known for systematically terrorising and expelling poor peasants so that foreign corporations can buy up the land. The dictatorship has been a puppet of U.S. imperialism for a long time. However, with the global rise of China as a new imperialist power, a new master is rivalling for domination in Africa. Chinese corporations are increasingly influential in the East African country which is the continents’ second most populous country with 102 million inhabitants.

4.             Ethiopia is a multi-ethnic country with 10 ethnicities numbering at least one million people. However, social poverty and suppression of democratic rights is worsened by the fact that the regime is dominated by one of the small ethnic groups – the Tigrayans make up only six percent of the country's population (here is a certain similarity with the role of the Alawites in the Assad dictatorship in Syria). This has fuelled mass protests particularly among the two biggest ethnic groups – the Oromo and Amhara people. Together, they make up over 61% of the population but are politically, economically and socially marginalised.

5.             The regime’s position has been undermined also by increasing difficulties in foreign political matters. The construction of the controversial Blue Nile dam project, the so-called Renaissance Dam, provokes massive tensions with Egypt including the risk of a regional war. Furthermore its leading role in the AMISOM mission in Somalia – whose purpose is the occupation of country in service of the Great Powers to defeat the popular insurrection – has produced no lasting results. Despite huge costs and massive losses since the beginning of Ethiopia’s military intervention in 2006 (the AMISOM troops is said to have suffered losses of up to 2,000 fatalities) and despite full support by the imperialist powers, the occupiers proved unable to defeat the local rebellion and the imposed puppet regime would immediately collapse in case of an end of the AMISOM mission.

6.             The Economic Liberation Association (Zambia) and the Revolutionary Communist International Tendency fully support the mass protests against the reactionary capitalist EPRDF dictatorship. We propose to revolutionaries in Ethiopia to work towards the formation of action committees in the workplaces, neighbourhoods, schools and universities in order to organise the workers and oppressed. Such committees should mobilise for the struggle and decide about the main demands, the forms of protests, the perspectives etc. They should also organize self-defence units in order to defend the demonstrations against the regime’s repression apparatus.

7.             Revolutionaries should fight for a program focused on democratic rights (like the right to assemble, to demonstrate, to organise, to strike, for freedom of press, etc.) as well as against any ethnic discrimination. Likewise they should fight against unemployment and poverty and call to establish a public employment program under the control of mass popular organizations, financed by the expropriation of the super-rich. They should also call for a Revolutionary Constituent Assembly. Such an assembly’s delegates should be controllable by those who elected them and should be open to recall by their constituents. The assembly’s role is to debate and decide on constitutional issue, and it should be protected by workers’ and popular militias against any intimidation of reactionary forces.

8.             Furthermore, ELA and RCIT demand an immediate end of Ethiopia’s military intervention in Somalia. We denounce the AMISOM mission as a reactionary occupation of Somalia in the interests of the imperialist Great Powers (US, EU, China, Russia, Japan). Consequently, we support the national liberation struggle of the Somali people against the AMISOM occupiers.

9.             Revolutionaries in Ethiopia should combine such demands with the perspective of fighting for an authentic workers and peasants government. Such a government would be based on workers’ and popular councils and militias. It would exclusively serve the interests of the popular masses and would remove power and wealth from the hands of the small corrupt elite of super-rich politicians and army generals. It would also expropriate the foreign imperialist corporations which are exploiting the country.

10.          In our opinion, it is crucial to view the popular struggle in Ethiopia not in national isolation. It is part of an international wave of liberation struggles in neighbouring or relative nearby countries like Sudan, Somalia, Yemen, Palestine, Tunisia, Syria and Iran. Revolutionaries in Ethiopia should explain the necessity of international solidarity with the liberation struggles against foreign occupation and dictatorships. ELA and RCIT consider the popular struggle in Ethiopia as part of the liberation struggle of all African people. We emphasize that freedom can be achieved only if the workers and poor peasants succeed in liberating the continent from the grip of imperialist powers, overthrow the capitalist class and open the road to a socialist future! Forward to the United Socialist States of Africa!

For our analysis of the Ethiopian regime and the resistance against it we refer readers to our article: Yossi Schwartz: Ethiopia: Down with the Dictatorship of Hailemariam Desalegn! 17 August 2016, https://www.thecommunists.net/worldwide/africa-and-middle-east/ethiopian-dictatorship/

We refer readers also to the new RCIT Manifesto:

RCIT: Manifesto for the Revolutionary Liberation of Black Africa. Economic Freedom and Political Power for the Workers and Oppressed through Socialist Revolution! Adopted by the 2nd Congress of the Revolutionary Communist International Tendency (RCIT) in Lusaka (Zambia), November 2017, https://www.thecommunists.net/theory/manifesto-for-the-revolutionary-liberation-of-black-africa/

For other documents on the class struggle in Africa see: https://www.thecommunists.net/worldwide/africa-and-middle-east/ 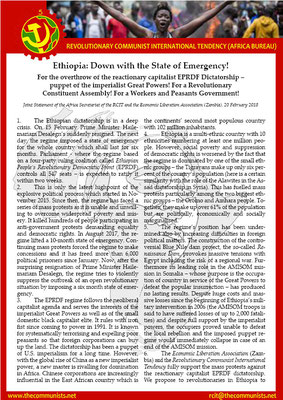 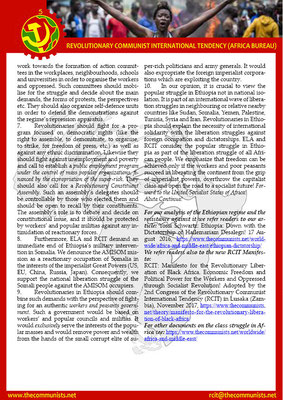